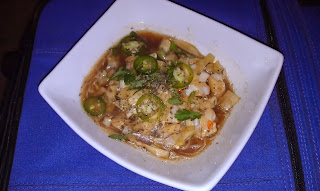 I have to admit, mine isn't as beautiful as the dish that inspired this, from the lovely and talented Dorothy Stainbrook at Heath Glen Farms, linked here:

But, I was very excited at the change to finally convince my husband that he would like this dish. I love pho, and we have tried it a few times, but he just never liked it. Well, in his defense, the first time he had it, I brought it home from a restaurant, and I didn't give him proper instructions on how to eat it. He took ALL of the garnishes, dumped them into the soup and attempted to eat it. It wasn't good. He isn't a big fan of soy sauce, and there was way too much basil and too many hot peppers, so it didn't go over well. We have had some bad versions as well. So, he was convinced he didn't live it.

I was determined I could make a version he would like, and then I saw Dorothy's crock pot style pho. I knew I could slightly change the mix of ingredients to make it something he could like. And, he did ! The best thing about this is how easy it is to modify to your tastes. Thank you so much, Dorothy, for inspiring this lovely soup !

Crockpot Beef Pho
1 pound oxtail, short ribs or beef shank
2 tablespoons fish sauce
2 tablespoons soy sauce
2 tablespoons olive oil
6 cloves garlic
2 large onions, diced
4 ounces ginger, diced
8 cups beef stock
1 cinnamon stick
1 teaspoon anise seed
1 teaspoon fennel seed
1 teaspoon red pepper flakes
2 tablespoons honey
For garnishes:
Lime, cut in wedges
Bean sprouts
Sauteed cabbage
Thin rice noodles
1 pound sirloin steak, thinly sliced
Jalapeno pepper, thinly sliced
Fresh herbs: basil, mint, cilantro
Place oxtail, ribs or shank in a zip lock bag, along with the fish sauce and soy sauce, and place in the refrigerator. Let marinate overnight. In the morning, heat olive oil in a large, non-stick skillet. Place meat in skillet and sear well on all sides. Place meat in a crockpot. Add onions, garlic and ginger to the same skillet and saute until all are carmelized, about 10 minutes. Add these to the crockpot, and then pour in beef stock. Place a small saute pan over high heat, and place dry spices in pan. Heat spices until they become aromatic, let them cool, and place in a small cheesecloth pouch. Add these to the crockpot as well. Heat on low for 8-10 hours. Strain broth through a sieve to remove all the bits, and simmer. Plunge the noodles into the broth just until soft, then place in a bowl. Gently lay strips of steak over the top of the noodles, and our hot broth over the top. Garnish as desired.

Am I bitter ? Absolutely not. It was a calculated risk to make a non-traditional chili for my Scandinavian Lutheran coworkers. Even more risky to make it spicy, with some Indian inspired flavors.

I contemplated making the previously award winning white chicken chili,  but with nine other entries,  I thought I had some room for something more adventurous.  Would it win? Probably not, but I was really happy with the flavor, and the foodie folk at work appreciated the unusual combination of flavors. 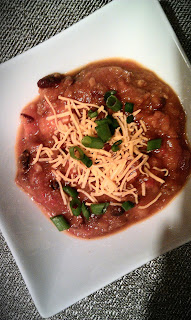 Posted by Unknown at 9:52 AM No comments:

I have a friend, Soraya, who loves to make jam. And the jams are, quite frankly, phenomenal. She is always kind enough to share them with us, and we love them. But, we don't eat a lot of jam. I use it more in recipes than just eating on toast or bread.
I have a handful of recipes that call for jam (thumbprint cookies, trifle), but I wanted something that would complement this really unusual sour cherry jam she made us this year. I like the fact that it isn't overly sweet, and it made these almost taste like a filled granola bar. I think the beauty of this recipe is that I could substitute any jam for the filling, but the mixture of the sour cherries and garam masala was perfection.
Oatmeal Bars with Sour Cherry Jam 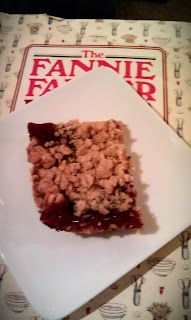 2 sticks butter, softened (1 cup)
1 3/4 cup oatmeal
1 3/4 cup flour
2/3 cup dark brown sugar
1 teaspoon garam masala
12 ounces sour cherry jam (or whatever kind you prefer)
Preheat oven to 375. In a large bowl, mix together the butter and the dry ingredients. Press half of this mixture into a 9 by 13 pan, to form a crust. Evenly spread the jam over the top of the crust. Gently sprinkle the remaining dry mixture evenly over the jam, and press down lightly to set. Bake 35-45 minutes until golden brown. Remove from oven and cool completely before cutting into squares.
Posted by Unknown at 7:29 AM No comments: 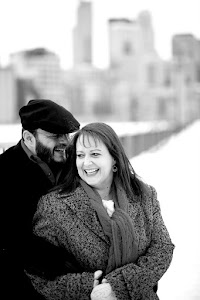